This is the info page of the Eurovision Song Contest 2016, which will take place in Sweden. The dates for the semifinals are 10th and 12th May and for the final 14th May. The host city will be Stockholm and the venue Globen. The presenters are Petra Mede and Måns Zelmerlöw. 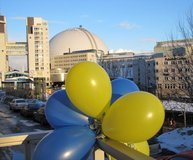 
Romanian entry Moment of silence by Ovidiu Anton is withdrawn from the contest due to non-payment of debts to the EBU.


The pots for the allocation draw were:


The countries which will participate in ESC 2016:


Countries which have confirmed their withdrawal:

ESCSTATS.COM is in no way officially connected to or endorsed by the Eurovision Song Contest organisation.